Dan’s Story – A Father Celebrates One Year of Sobriety

In honor of Father’s Day we are grateful to share the recovery story of one of our former guests which highlights a family’s journey and the healing power of recovery.

I am 40 years old, I’m from Worcester Massachusetts, and I’ve lived here my whole life. I’m married with 5 children. I’ve been battling addiction and alcoholism pretty much my whole adult life.

I’m the youngest of four children, and I grew up in a loving household.  I was the baby of the family and I was treated as such – with a lot of love. But in the process of getting sober, I was able to look back and realize I always felt a little different. I’m the youngest by 10 years, so once everyone went to college and got jobs I essentially became an only child.

I was involved in a lot of activities and sports – my two brothers were athletes and I got to be a part of all that. It felt like one day I woke up and I was in the house by myself. They became very successful and I just kind of felt out of place. I just didn’t see where I fit in anymore. 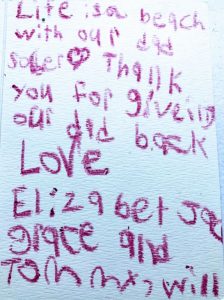 I played a lot of sports growing up, and I was successful at it. It was my true passion. It was my social life and kind of what I hung my hat on. I was given a lot of opportunities; I went to private high school and was part of a lot of great sports teams. I was recruited to play football in college.

Alcohol wasn’t really a part of my story until senior year of high school when I started drinking with my friends on the weekends. Looking back now, I can see that I always drank to excess. I was always the one who had to try to drink the most. I wanted to be ‘the cool guy’, you know? I wanted to be able to brag that I was the drunkest, or I had the most fun, etc. 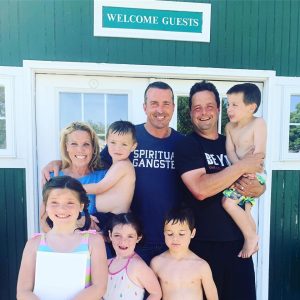 Alcohol didn’t really impact my life back then, but once I got to college I was away for the first time in my life and I was trying to find my way. I wanted to hang with the cool crowd – the older guys – and partying took over my life. It started with drinking and using marijuana mostly, but in 1999 I was introduced to Oxycontin. I didn’t know what it was at the time, but I remember loving the way it made me feel. It changed the way I felt in a way I had never experienced in my life.

A lot of my friends were able to use drugs and go to school and still succeed, but it became my every thought. Every second of the day, all I wanted was to have that feeling again.

Because of this, after two years of college it didn’t work out, and I came home – and my addiction came back with me.

I didn’t really realize what was happening, but I knew I could never say no to anything. I was one of those people who if someone put something in front of me, I would take it.

I went to my first treatment at 23, and I was able to understand for the first time that I had an addiction to opiates, and that I couldn’t control it. When I got out of treatment, I was able to stop, and I was lucky enough to meet my wife, who was (and is) my best friend.

After I met her I started coaching football and she was coaching field hockey. We meshed instantaneously, and it was the best time of my life. I was able to keep it together for that time. We got married, started having children, and it was a dream come true.

One day I made a mistake and took a painkiller. It was 8 years of hell from there.

I couldn’t stop, and I got to a place of total hopelessness. I was in and out of treatment and in and out of the house. My wife didn’t really realize what was going on because I would manipulate everything. At this time we had three children, and then she got pregnant with twins so we had five kids under the age of seven.

Doing the work I’ve done in recovery this time I was able to look back and realize I had no coping skills my whole life. I always wanted to run from things; I always looked for ways to get out of things and not deal head-on. Drugs and alcohol had become my way to ease my mind a little, slow me down.

I could get sober, but I couldn’t stay sober.

I just thought that if I put drugs down, if I put alcohol down, that everything would get better and that I didn’t need to find out what was really wrong, what was really going on. I thought it was the drugs and alcohol and not anything else.

In my mid-thirties I was in and out of treatment. At one point I was able to stay sober for a year, but I slipped away from my recovery. I had this anxiety inside, and the only way I knew was to go back to drugs.

I had a terrible relapse where everything fell apart. I became hopeless. I put people I love in danger. The people around me just had a look of disgust. I became a person that I never thought I would be.

I would think all the time that the best thing for me to do would be to disappear. I felt I would be doing everyone a favor – my family, my parents, my wife, and my children. They didn’t sign up to have their husband and Dad be a drug addict, someone who lost their whole moral compass.

My job was in jeopardy. Nobody wanted to talk to me. I had no friends left. I bankrupted my family. My marriage was over.  I felt my kids were better off without me.

My whole life became how to escape.

By the grace of God my wife called Kevin Mikolazyk from the Herren Project – she’s a teacher and Chris had spoken at her school – who helped me get into treatment in Florida.

I hadn’t talked to my wife or kids in a month. About three weeks into the Florida treatment I was told I would be coming to Herren Wellness.

This turned out to be the biggest blessing I have ever had in my life.

I was facing the decision to put some real work into myself or give up. I decided I wanted to give this one real chance.

It was hard. I felt like I went to bed at 18 years old and woke up at 40 in treatment with five children and a raging drug and alcohol problem.

Thank God I had the opportunity to go to Herren Wellness and slowly they made me feel like I could do this. I had tried so many times I really didn’t think it was possible. I thought I was one of those hopeless people that would never get it, and that I was destined to die from this.

I felt like I had no real purpose, and Chris challenged me. Lori and Chris were shining examples of what recovery looks like on a daily basis, and this was one of the most important things they did for me. 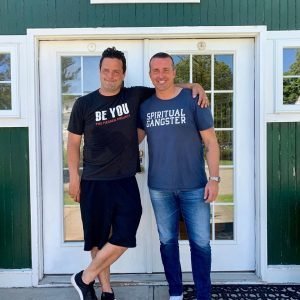 Something I had never understood before was that I couldn’t just get sober and everything would be okay. I didn’t think my behaviors had to change. I thought I could act crazy and stay sober. I finally realized that even if I did manage to stay sober without making changes I was going to be a miserable human being. I knew I had to change my outlook on things and reach out.

The way Herren Wellness treated me with love and support when I really didn’t think I deserved it was something I needed, and I also needed a kick in the butt.

I was in a meeting with Chris one day – and I’ve mentioned I love sports – and he told me that it’s like it is the 4th quarter and I’m down 40 points and I need my best team with me. I’ve carried this with me. It’s something I really took to heart.

Now I talk to people in recovery every day. I surround myself with sober people who are doing it right. I’ve learned that in order to keep sober you also need to put your hand out and think of others, something that I never did. I always just thought of myself, and I came to realize to be successful in recovery you have to help others, think of others, and not always yourself.

I stay as close as I can with the people in my circle. I keep it tight and talk to somebody in recovery every day. I don’t go to bed with an issue; if I have something going on, I let people know.

My whole goal right now is to be a good husband, a good father, and to help other alcoholics and addicts who are going through the same thing that I have. There is no worse feeling than that hopelessness of wanting to disappear.

I needed to hear that I could do this. I needed to be around people that were doing it every day. I needed examples of recovery.

Other treatment centers I went to were good, but the support my family got from Herren Wellness – from Chris and Heather in particular – was amazing. The support my wife got – my wife who I tortured for a long time, and who probably couldn’t believe her life had come to this – was incredible. Heather is a shining star.

Both my wife and I needed to see that recovery is possible, that this can happen.

The attention I receive on a daily basis helps so much. If I have an issue I can call so many people at Herren Wellness who will be there for me. I had never experienced anything like that before.

Before my one year anniversary, I was getting a little jittery, kind of emotional. I texted Lori and she responded within five minutes.

Seeing the way Herren Wellness cares for people – it amazes me every day. It’s an amazing thing to be part of that community. The best friends I have in the world are from that community.

I feel like a human being again, and it’s been a long time since I felt that way. It’s because of the Herren Wellness community and the support I get. I had someone I was at Herren Wellness with come up from New Jersey for my one-year celebration there, and that meant to the world to me.

People show up, and I’m trying to show up for people too, and be a good person. That’s what recovery is all about.

Recovery for me is showing up every day and being the best person I can be.

I’m also very lucky because the support I get from my family and my siblings has been amazing. 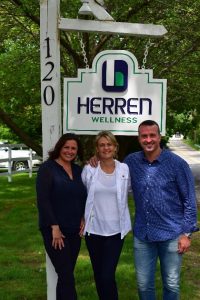 Chris told me I couldn’t go back to the same things, and that I needed to change things. I had to take some chances, do things differently if I wanted things to change. Chris motivated me to make those changes.

My wife has given me so much support and has held it all together. It’s not always easy, but from where we were a year ago to now? It’s a miracle, and I couldn’t have done it without the support I got from Herren Wellness. 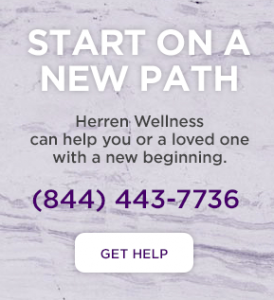